trong anti-inflammatory properties speed up the healing of 1st degree burns, inflammation including arthttphritis, gout, and skin irritations. Studies have shown that the flavonoid fraction of St. John’s Wort is an analgesic, reducing pain.

WHAT YOU MIGHT NOT KNOW ABOUT SAINT JOHN’S WORT

St John’s Wort is also used on bruises, sprains and minor abrasions, bug bites, as well as general wound healing and decreased formation of scars. There have been some reports of improved foot conditions related to diabetes and bone disease.

TRY IT IN AVANI HERBALS

The topical application of St John’s Wort are usually made by infusing the plant in oil, adding beeswax to make salves and balms or using the infused oil in creams or lotions. I make my own St John’s Wort oil infused into olive oil and I also use both the fresh and dried herbs in The Balm and Lip Repair I make for dried, cracked, inflamed skin. (In the near future look for my Blog on how to make your own infused herbal oil.) 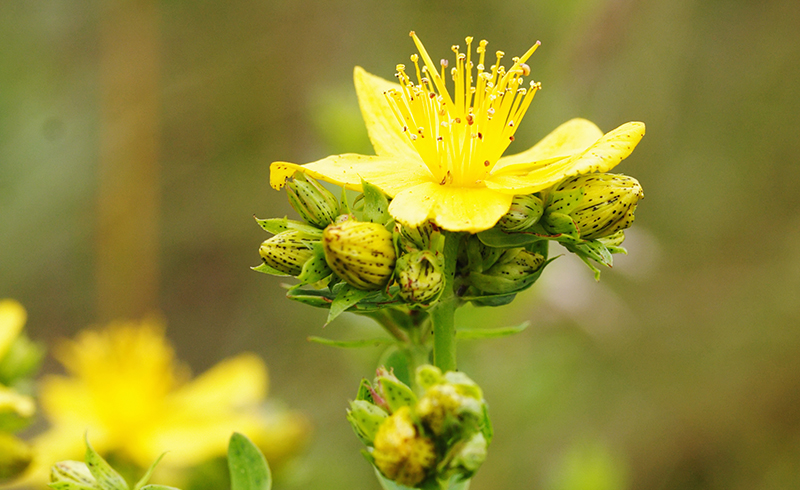 The information I provided above is just a short summary of this amazing herb. There have been many favorable clinical trials for the use of St John’s Wort, which has led to its increase in popularity and widespread use to improve health. To gain insight into many more of the healing properties of this herb, I highly recommend that you research the Internet for more information.

Here’s a few to get you started:

Historically, known as hypericum, St. John’s Wort dates back at least to 400 B.C., where it was used not only medicinally, but was also believed to mystically expel evil spirits.

After the first century, some believe that Christians named the plant Saint John’s Wort after their beloved St. John the Baptist. These bright yellow flowers generally bloom on or before June 24th, which is the Feast Day of John the Baptist. The five yellow petals were symbolic of a halo and when picked they bleed a deep red liquid, which some believed to be symbolic of the blood spilled of their beloved St John.

St. John’s Wort, hypericum perforatum, contains properties that are antidepressant, antibacterial, anti-viral, anti-inflammatory, contains antioxidants and is a superb wound healer. The key active ingredient of the plant, hypericin, is in the dark red oil glands that line the margins of both the flower petals and leaves.

This site uses Akismet to reduce spam. Learn how your comment data is processed.